CoolSculpting is the #1 non-invasive fat reduction treatment in the world and it’s helping millions of men and women literally freeze away unwanted body fat. FDA cleared as safe and effective, CoolSculpting treatments are painless and require no downtime,* making it the perfect non-surgical substitute for liposuction. CoolSculpting is ideal for reducing stubborn fat deposits such as belly fat, love handles, fat that clings to the thighs and upper arms, back fat, double chins and more. This scientifically validated fat reduction procedure offers natural looking results that are long-lasting.

WHAT ARE THE BENEFITS OF COOLSCULPTING?

HOW DOES COOLSCULPTING WORK?

CoolSculpting utilizes the scientifically proven process known as cryolipolysis. Using patented cooling panels, CoolSculpting safely exposes unwanted body fat to freezing temperatures without harming the skin or surrounding tissues. When exposed to controlled cooling, a portion of subcutaneous fat cells freeze and crystalize, triggering apoptosis (cellular death.) Over the course of several weeks, the dead fat cells treated with Cool Sculpting are collected by the body’s natural metabolic processes and excreted from the body as waste. Clinical data shows a single CoolSculpting treatment can result in 25% decrease in targeted fat cells, providing an impressive reduction in unwanted body fat. The end result is a transformed physique that looks noticeably skinnier and more sculpted. 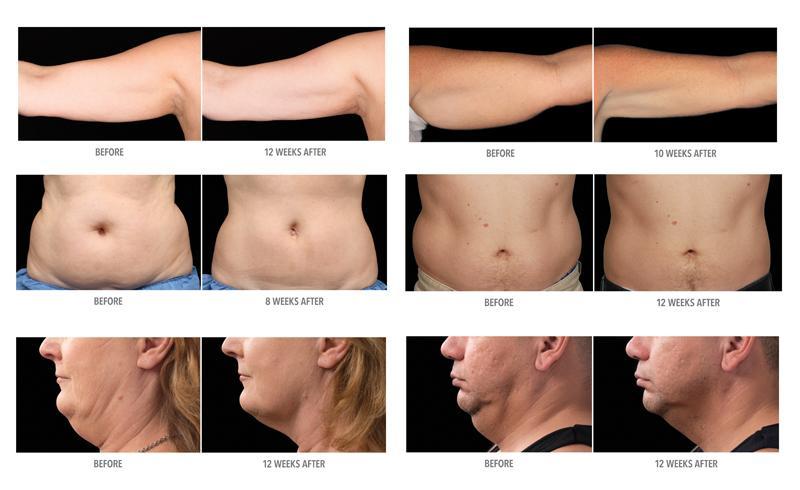 HOW MUCH DOES COOLSCULPTING COST?

Many patients dealing with stubborn fat deposits that resist diet and exercise want to know: Are CoolSculpting results permanent? One of CoolSculpting’s most attractive benefits: results that are scientifically proven to last. One longitudinal study measured the long-term efficacy of CoolSculpting’s results after a single treatment targeting love handles. The study evaluated CoolSculpting before and after pictures spaced 9 years apart and concluded, “local reductions in flank fat [after a single CoolSculpting treatment] have significant longevity in these subjects and suggest that results from Cryolipolysis may be very long-lasting.”

WILL COOLSCULPTING HELP ME LOSE WEIGHT?

Cool Sculpting is popular among male patients who want to reduce belly fat and love handles and define musculature around the chest and abdomen. As more and more men are transforming their bodies with Cool Sculpting, major media outlets that cater to a male demographic have offered their own CoolSculpting reviews. GQ magazine recognized CoolSculpting’s popularity among men explaining “The [CoolSculpting] machine has been running day and night, with men coming in huge numbers.” And CoolSculpting reviews found in Men’s Fitness tells its readership that Cool Sculpting “help[s] you lose fat in areas you haven’t been able to hit through diet and exercise.”

As the cooling begins during the first few minutes, you will feel pressure and intense cold. This soon dissipates. Many people read, watch videos, work on their laptop, or even take a nap during their treatment.

CoolSculpting® is a registered trademark of ZELTIQ Aesthetics, Inc.

*All claims are supported with scientific evidence. Results may vary. Unless noted otherwise, testimonials are of real patients who have completed treatment(s.) Before and after images reflect real results from real patients, although individual results may vary. Statements estimating treatment duration and the amount of treatments required are based on the typical experience of patients of Mannheim Med Spa, however, duration and amount of treatments needed may vary per client.

We Offer the Following Services

Office Hours
Get in touch